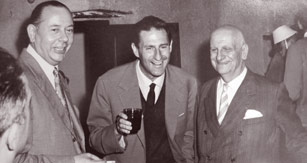 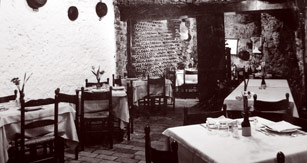 The restaurant "Pentagramma" as it once was

The Teacher Gian Carlo Menotti, a month before of the beginning of the Festival, in a working meeting at Palazzo Campello, asked to Wally Toscanini, daughter of the famous conductor immortalized at the New York Metropolitan, to open a store of high quality antiques. Wally, a business lady referred to a well-known doctor , Dr. Giuseppe Manini, once Mayor of Narni, passioned about opera in Spoleto, having always attended the Teatro Lirico Sperimentale performances as ardent friend of its founder, the lawyer Adriani Belli. Dr. Manini, with his wife Iris Cantelli, nice lady Titian, took advantage and said Yes to the Maestro Menotti, preparing a pleasant surprise. He rented a room for the filing of the wood being Martan, adjacent to Freedom Square, transforming it into an elegant restaurant in two weeks, accompanied by antique furniture, which holds only thirty people.

It was the Pentagramma Restaurant, the legictim son of the restaurant of the artists. It was born in 1959. The chef's name was Norma and the waiters were found in the street. They were four: a boxer, a porter who seemed a cupboard, with square shoulders and a big neck , an unemployed and a student of foreign languages. Peppe Manini and his pretty wife had "invented" unknown dishes for Americans people lentils and sausages, beans with pork rind, with Trebbiano and Rosso di Montefalco wines. It was an extraordinary success. People could ate just with a reservation, which came even from the phone from United States too. In a hot sunny arrived the Elsa Maxwell's booking, she was the famous "Hollywood gossip" who asked to be taken as a postal package from Fiumicino and to be transported by taxi to Spoleto.